from When I Was Young

The 11+ was a grading exam. On the basis of the result it was decided whether you went to an ordinary secondary school or a grammar school. Because I had done well, the Headmaster asked to see my parents. He told them he thought I should apply for St Olave’s and St Saviour’s Grammar School for Boys near Tower Bridge. I did, and I was the only boy from Victory Primary School to go there.

I was very proud of my new school. It was in a grand old building, with a beautiful hall. The masters wore black gowns and sometimes mortar-board hats, and were addressed as “Sir”. The school was very traditional, having been founded in 1561 and granted a charter establishing it as a grammar school in 1571, when Shakespeare was seven years old. In the Charter it was called The Free Grammar School of Queen Elizabeth of the Parishioners of the Parish of Saint Olave in the County of Surrey. The building we were in was not the original one but it was still pretty old, dating from 1894. 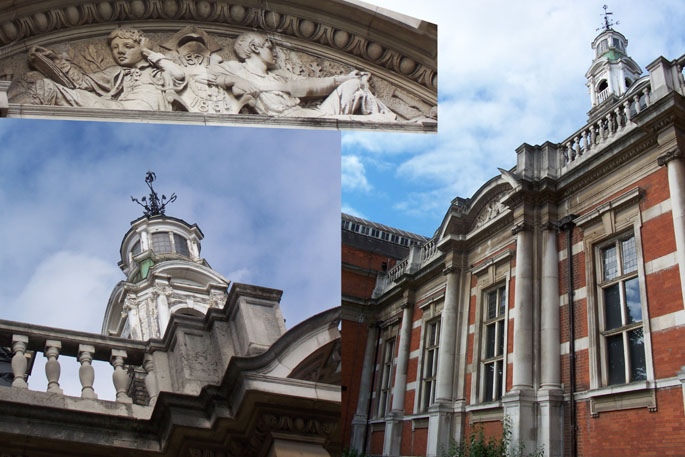 At St Olave’s I was the first of 1964’s new boys (“weeds” we were called) to get into a fight. Another weed, whose name has faded from memory, called me “Greek scum”, and this for no reason that I can remember. I was angry, and I laid into him. I wouldn’t have reacted like that if he had just called me “scum”, but he had no right to pick on my nationality as well.

I managed to get a few blows in before a teacher separated us and sent us to the Headmaster Dr Carrington to be dealt with. I was called in to his office first, and, still flushed with anger, I told my story. Then he saw the other boy, and after questioning him, he called me back in. I was expecting a caning.

I stood there in front of his desk waiting for sentence to be passed, but instead Dr Carrington smiled reassuringly, and said just what I needed to hear: “Andronikos, we’re proud to have you here. You can go.”

With those few words he won my eternal gratitude and respect. It wasn’t just relief at being allowed to go back to class unpunished, it was the fact that in this most English of schools, with its centuries old traditions and proud history, there was a place for me, a little Greek-English boy from Elephant and Castle.

The other boy got “six of the best”. He never bothered me again. Nor did anyone else at that school.

There were times when I did get caned, and it really hurt, but I never held that against Dr Carrington. The rules were rules, and we accepted that if we broke them and were caught, we got punished. The odd thing is that I don’t remember those other occasions with any clarity. All I remember is that I was caned once or twice for misdemeanours which I cannot now recall.

The encounter with Dr Carrington which I remember most clearly was probably also one of my most embarrassing moments at St Olave’s. I had missed a Saturday-morning detention because I couldn’t be bothered making the hour-long train journey to school to spend two hours writing lines. The following Monday I was summoned to his office after Assembly to explain my absence.

“Why weren’t you at detention on Saturday, Andronikos?”

“And how did you manage that?”

“I was in the garden, and I was messing about with the pitchfork when I dropped it and it fell into the back of my leg.”

He didn’t believe me. What would I be doing in the garden messing about with a pitchfork at seven in the morning? He wanted to see the evidence.

I tugged at my trouser leg, trying desperately to pull it up far enough for him to see where the pitchfork had gone into my calf, but my fashionably tight trousers were far too tight. Dr Carrington was determined:

“You’ll have to take your trousers down, Andronikos.”

Reluctantly I did as I was told, and stood there, a victim of fashion, with my trousers around my ankles, while he inspected the small red scab on my calf.

Still not satisfied, he told me to pull my trousers back up, and sat down again at his desk. It was obvious that he didn’t believe me, but the physical evidence was there. I had dropped a pitchfork into the back of my leg, and there was a scab—only a small one unfortunately—where it had pierced the flesh. How was he to know I had done it on Sunday? I stuck to my story.

Why was I in the garden at that time of the morning? I’d gone out to feed the dog, sir. How did I get the pitchfork into the back of my leg? I’d been holding it hanging over my shoulder, sir, when it slipped out of my hand. Why was I holding a pitchfork anyway? It was just there, sir, and I picked it up. I was just messing around, sir.

He looked at me quizzically for what seemed like ages, and then, with a twinkle in his eye that told me he found me quite amusing, said something which—as I realised years later—summed me up perfectly:

“You’re a good lad, Andronikos, but a bad lad.”

With that he dismissed me. I left the room trying to look contrite, but inside I too was smiling: I’d managed to avoid a caning!