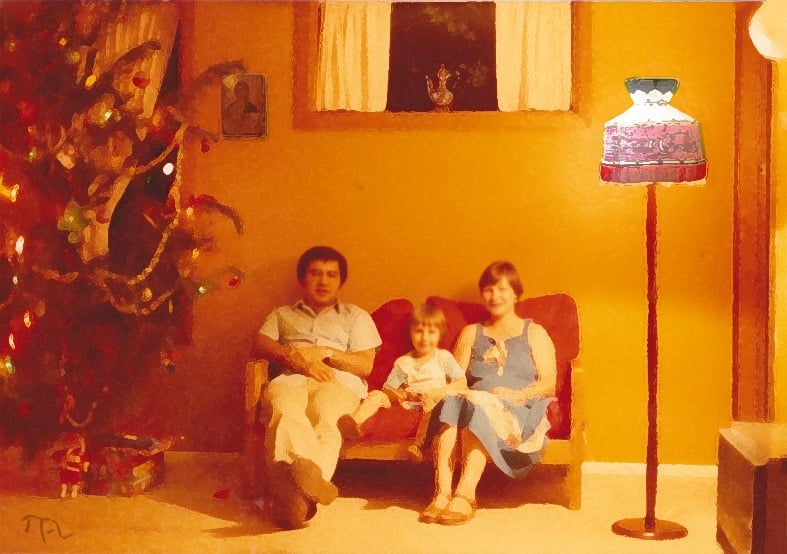 Our 2nd Christmas in Australia. Armidale, N.S.W. 1982, a few months before we moved to Melbourne.

One can’t help but wonder about the ethics of releasing from the private domain comments about third parties such as those to be found in Peter Bien’s From 18 to 85: Chronicling a Fortunate Life (New York: Terpni, 2017) …. When one invites a colleague to one’s home, one does not expect a condescending and entirely misinformed description of one’s situation to be published some years later for posterity. It is with regret and reluctance that I am obliged to set the record straight.

We also had dinner with Pavlos and Andria Andronikos in their cramped house in an insipid suburb: she a sweet English girl loaded now with two children. She seemed like a trapped bird to me. Really, to live in a commune would be preferable to this martyrdom in suburbia. It’s the worst of all possible worlds. No extended family to help. No freedom that is meant to compensate for the loss of the extended family.

He omits to mention what he certainly knew: that I and my family were newly arrived in Melbourne (from Armidale N.S.W.), that my wife had given birth to our second child only two months before, and that we had only very recently moved from temporary university accommodation to our own rented house.

Indicative of the gap between reality and his perception of it is the fact that he gets my wife’s name wrong (Angela, not Andria). Even wider off the mark is his fantasy of her as trapped and martyred in an “insipid suburb”, and “loaded now” with two children. He could not have been further from the truth.

My wife is a very talented and beautiful woman. She could have been anything she chose to be, but what she chose for herself was me, and the life of a stay-at-home mum in the leafy suburbs. It was entirely her decision to give up her career in teaching when our first child was born, even if that meant making do with less money. She chose that because being a good mother is what fulfils her more than anything else. She certainly did not regard our children as a burden or herself as trapped and martyred.

My wife has an amazing and rare ability to understand children, and to enter their world. She can play with them for hours on end without tiring at all, and they adore her. I have never met anyone to compare with her in the rapport she has with children. Given this grace, it was only natural for Angela to want to look after her own children in their pre-school years.

So, what Bien saw on that Sunday in 1983, was a contented but tired mother of two recovering from childbirth and the upheaval of moving twice in a few months, and a family that, despite the difficulties of settling in to a new home in a new town, was happy to extend hospitality to a Neohellenist colleague visiting from the USA. I’m rather wishing we hadn’t bothered.

PS 1: Now, in our twilight years, when our children themselves have young families, Angela is in her element again as a doting grandmother. Life is good…

PS 2: I am aware that there was another visit by Peter Bien to my home in 1990 which is chronicled in a more positive way. Although this may redeem Bien somewhat, it is nevertheless not a retraction nor an apology for his disturbing 1983 comments.