“Not only for the student, but for the general reader new to Modern Greek writing, this is a jewel of a book.”
Beverley Farmer, Australian Book Review

The woodcut illustration on the cover of Vasilis Arvanitis is by Panos Valsamakis.

Unfortunately this translation of Vasilis Arvanitis is out of print at present, and seems likely to remain so for the foreseeable future. If you need a copy, please contact me, and I may be able to help.


Vasilis Arvanitis first appeared in an Athenian newspaper in 1934 as a short story. [1] In 1939 a second, much longer version was included in a collection of short stories by Myrivilis entitled The Blue Book, but this was again revised and extended during the period of the German occupation of Greece and was published as a separate volume late in 1943. The 3,200 copies of this first edition sold out within a very short time so that a second edition had to be published in 1944. [2] The work is now into its eighth edition and has been translated into German, Spanish, Danish, Swedish, and Czech. This however is the first English translation of the complete work to be published. 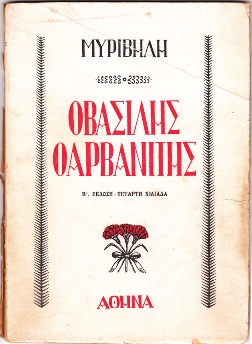 The cover of the 1944 edition of Vasilis Arvanitis

From the first, Vasilis Arvanitis was greeted with critical acclaim. Apostolos Sahinis, reviewing it in 1944, described it as “a book which can without hesitation be considered faultlessly perfect”, [3] and another reviewer, K. Despotopoulos, decided that “with Vasilis Arvanitis, Myrivilis has arrived at the peak of his artistic maturity and, at the same time, has brought this genre of our prose fiction to perfection”.[4] Perhaps, however, the judgement which pleased Myrivilis most was that given by the poet Angelos Sikelianos, who, comforting Myrivilis soon after the German occupation of Greece, embraced him, saying: “Don’t worry, as long as books like your Vasilis Arvanitis... are being written, Greece will endure”.[5] She did endure—a great deal as it happens—and, in that dark moment of Greek history, Vasilis Arvanitis brought, through the catharsis of tragedy, some comfort and hope to a troubled people. This is how one reader remembers the work:

I first read Vasilis Arvanitis when I was a student, during the German occupation. And I felt a strange emotion overwhelm me. So much so that I did not want to finish the book quickly. I felt the same emotion again, when I reread Vasilis Arvanitis after so many years. The same emotion, the same fascination... Perhaps it was no accident, the fact that Vasilis Arvanitis was published in the years of the German occupation. Myrivilis wanted to convey a message with this book of his. To send us a ray of hope in those difficult and dark times. To remind us of the heroism, the ‘inexplicable heroism’, which can take on the many and conquer. [6]

The novella is set in Myrivilis’ home village of Sykamnia on the island of Lesbos in the first decade of this century. At that time the island had a mixed population of Greeks and Turks who, although they lived in the same villages, nevertheless conducted their affairs separately. The Greeks, who were in the majority, resented not being their own masters and dreamed of the day when they would break free from Turkish rule and unite with mainland Greece.

That day came on the 8th of November, 1912, and with it came the end of four and a half centuries of Ottoman rule. The action, then, is set in the final days of Greek and Turkish coexistence on the island, and in some ways celebrates that unique life-style which blended East with West, Christianity with Islam, and produced a prominent subculture of heroic young men who enjoyed living close to the edge and owed allegiance to no one but themselves.

The work belongs to the genre, popular in Greek prose fiction, which displays an intense nostalgia for a lost golden age when Greek and Turk lived together in mutual admiration and distrust. The genre flourished particularly after 1922 and the Asia Minor Disaster when Hellenism’s Anatolian wing was miserably amputated.[7] There was a forcible exchange of populations between Greece and Turkey and the cultural interaction which had existed up till then ceased. The Greek dream of regaining Constantinople was demonstrated to be just that, and, after an initial period of disillusionment, it was natural for writers to search the past for a new vision and a new understanding of what it means to be Greek.

Myrivilis wanted his hero, Vasilis Arvanitis, to be an expression of the Greek spirit at its most heroic, but in attempting that, he created one of the most enigmatic heroes in the Greek tradition: a godless, anarchic, and free spirit to haunt the twentieth century and remind us of the “hunted bird” inside each of us which “still struggles to free itself but cannot”.

The work follows the classical and heroic traditions fairly closely in that its hero’s exploits are presented in chronological order as separate episodes in the manner of early European heroic poetry and his life follows the classic pattern where the hero rises to a peak of achievement, overreaches himself, and is brought low by fate and the gods. To this time-honoured form Myrivilis adds a significant innovation by making the narrator a prominent character who is as important as the hero himself. Because of the early chapters of Vasilis Arvanitis where most of the narrative is about the narrator’s childhood rather than about Vasilis, we are always aware as the story of the narrator’s hero unfolds that a man, a “real” person, is recounting a story drawn from his past and from his memory. The mind of the narrator remains throughout, the window through which we “see” our picture of Vasilis.

Instead of foregrounding the hero, this technique foregrounds the hero’s relationship to the narrator. The narrator, a sensitive and godfearing patriot, looks back with nostalgia to the lost world of his childhood and, mingled with that nostalgia, at the very centre of the magical world he summons up from his memory, Vasilis stands triumphant. The anarchic and self-willed spirit of Vasilis fascinates him but also, one feels, disturbs him. The narrator’s character stands in opposition to the character of Vasilis, and the tension which results between his idolisation of him and his censure of him is what makes this work so much more than a finely written exercise in nostalgia. Freud might have described it as an expression of the dilemma of the ego.